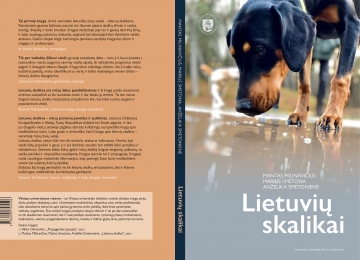 The book about national dog breed – the Lithuanian Hound

A new book entitled „The Lithuanian Hound“ was published in 2021 by Vilnius University Press.

The Lithuanian Hound is not yet recognised by the FCI but breed lovers and breeders make a huge effort for this to happen.

„It is one more step forward towards recognision, which is extremely important for preserving and promoting our national dog breed, – says Ramune Kazlauskaite, the President of the Lithuanian Kennel Club.

Some extracts from the book:

The scientists state that people kept dogs in the area of contemporary Lithuania already back in the Mesolithic period. The first written source mentioning dogs in the residential area of the Baltic tribes is Chronicon terrae Prussiae by Peter of Dusburg, stating that in the 12–14th c. Prussians used to burn a deceased noble person together with their weapons, horses, slaves and servants, clothes, hunting dogs and hawks. A more specific reference to dogs was contained in the letters of Vytautas, the Grand Duke of Lithuania, where hunting dogs were mentioned among other gifts sent to him. The chronicles also contain statements that Jagiello was an avid hunter who tended to spend more time in Lithuania, where dense forests were more suitable for this activity. Tatars, who came to Lithuania at the end of the 14th c., brought coarse-haired greyhounds and longhaired hounds with them. Their treasured their dogs since they were obedient and clever.

More information on dogs in Lithuania appeared in the 16th c. First, Lithuanian Hounds are mentioned probably for the first time in a court case. The proceedings of 1541 contained that Andriejus, who served as a clerk for Mrs. Jonienė Valavičienė, had taken a brown hound from the yard of forester from Hrodna Petras Micuta. It may have been a harrier, one of three sub-breeds of Lithuanian Hounds that existed in Lithuania.  (p. 115).

The Lithuanian Statutes contain a bit more information. However, it would be naïve, from a contemporary position, to expect that information contained there would allow distinguishing the breeds kept in Lithuania in the 16th c. clearly. The Lithuanian Statutes were not far between – the first one was adopted in 1529, the second in 1566, and the third in 1588, and therefore it is logical that information on dogs provided there should not be radically different. However, the number of groups of dogs was different in Latin and Polish translations of the Lithuanian Statutes, and the decrease in them was determined by different classification, where dogs were named according to their function during hunting and the animal being hunted, etc., rather than extinction of breeds. (p. 116).

It is claimed that in the 17th c. local hunting dogs were interbred with Curlandish Hounds and Russian Hounds. It has already been mentioned that St. Hubert Hounds should have appeared in the gene pool of Lithuanian Hounds even earlier – 15–16th c., while Curlandish Hounds probably appeared in the 16–17th c. A more interesting question is which breed of Russian Hounds, interbred with Lithuanian Hounds in the 17–18th c., is discussed because it has been established that older sources discussing the breeds of Russian Hounds provided different names and descriptions of their breeds, and only in 1917, the breed of Russian Hounds was fully established. Another question is whether it was Russian Hounds that were inbred directly, or, more likely, it was crosses of Russian and other hounds, keeping in mind that hounds from the Baltic region had an impact to Russian Hounds and not vice versa. However, the most interesting fact is that since the 18th c., and especially after Napoleonic Wars, many Polish heavy hounds and Lithuanian Ogars were brought to the central Russian governorates. Hunters admired these dogs due to their impressive looks and gradually crossed them with local Russian Hounds. The same happened after the uprisings of 1830–1831 and 1863–1864: returning Russian officers brought many hounds from the former Polish-Lithuanian Commonwealth. The outcome was that at the end of the 19th c. Russian Hounds showed characteristics of hounds from the Polish-Lithuanian Commonwealth, the breeds of Polish-Russian hounds started to be identified. Thus, in the turbulent 18–19th c., dogs moved together with their owners and that is how our hounds acquired the blood of Russian Hounds probably mixed with the blood of Lithuanian Hounds. (p. 117–118).

19–20th c. saw dramatic changes in hunting in Europe due to historical, political, and even biological processes, and this, in turn, had a huge impact on hunting dogs. For example, once bear-baiting was prohibited, Milanese dogs (canes Mediolanenses) gradually went extinct; once the number of hunted birds decreased in Europe, the need for fast and widely searching bird dogs appeared, and, as a result, the majority of local bird dogs that did not meet the expectations started to go extinct. Germans realised in due time that national breeds must be protected. Unfortunately, Lithuanian Hounds did not get such support, even though at the end of the 19th c. they were popular across Lithuania and especially in Samogitia. No other domestic animals suffered as much during the war and occupation in Lithuania as dogs, especially hunting dogs.

Even though in the interwar period, hounds were used for hunting and there still were those who appreciated the hounds, they constituted only a small group that tried hard to bring back the belief that a hound is a certain link to the past. Lithuanian Hounds received no strategically important attention from the state in the interwar period, and they did not have any specific status and were not considered cultural heritage by the state. No exhibition was organized for them, and no club or society was found for them.

In the interwar period, Lithuanian Hounds found themselves in a difficult situation due to many reasons: decreased forest areas and their quality, many more land owners after the Land reform; at the end of the war people engaged in hunting to compensate for seized food products, and this resulted in a decrease in animal population, and, as a result, hunting of the majority of animals was prohibited; poaching and degradation of fauna were widespread; a law was adopted preventing hunting with tall hounds (which gave rise to short Latvian and Estonian Hounds), and overall taxation on using hounds for hunting.

The government had an opinion that hunting with strong and fast hounds was harmful to animals being hunted. Some hunters had a similar opinion and went as far as to suggest replacing hounds with dachshunds, which according to them were better suited for hunting than overambitious hounds, which can work for more than ten hours and chase away animals. Even though at first the status of the hounds in the interwar period in Lithuania was not too bad, the law adopted in 1935 was the most harmful and almost completely eliminated hounds as hunting dogs.

Unfortunately, the Second World War has further reduced the already small pack of purebred Lithuanian Hounds, and only in the fifties of the 20th c. did handler Z. Goštautas started restoring the breed of Lithuanian Hounds. At that time there were some dogs left in Samogitia – around Telšiai and other neighbouring regions. It is believed that these dogs were the offsprings of large packs of hounds kept at manors at the beginning of the 20th c. Apart from Z. Goštautas, A. Kuzavinis, V. Klovas and others have also contributed to restoring the hounds and bringing the breed to the professional world of cynology. All these people travelled across Lithuania in search of dogs similar to Lithuanian Hounds. In 1966, the first standard of Lithuanian Hound was drafted and later updated. Trials and exhibitions of Lithuanian Hounds were held in the Soviet period, where all participating dogs were examined and their advantages and disadvantages were recorded. Meanwhile, the first documented dogs, in a contemporary sense, are introduced whose documents contain information about the origin of the dog. (p. 119–120)

We can take comfort in the fact that the effort by handlers and hunters has not been in vain and the work with hounds continued even after 1990. It is true that the size of dog population changes – it falls down and increases again, but the interest of people in this breed only grows stronger. Since 1990, the concept of what a dog is, what it should be, and what it needs, has been gradually changing. Great victories have been achieved: Lithuanian Hounds compete with other breeds on equal terms; Lithuanian and international media write articles about Lithuanian Hounds, make videos, and there is a number of kennels of Lithuanian Hounds.

Sculptures in three cities in Lithuania (Vilnius, Klaipėda and Telšiai) are probably the most important symbol of making the breed more popular and commemorating it. Lithuanian Hound together with other national breed Žemaitukas were depicted on commemorative coins issued by the Bank of Lithuania. In 2018, Lithuanian Hounds were evaluated and a new standard of this breed was presented to the Lithuanian Kennel Club. Today, people train Lithuanian Hounds and prepare them for living in a city, train them to perform human search, try to attend different competitions and various cynological activities. We can rejoice in the fact that the breed of Lithuanian Hounds, which came into existence in the 15th c. and survived the 19th and the 20th c., geopolitically and historically difficult to Lithuania, has not disappeared and now regains its forgotten glory, honour and abundance.

A contemporary Lithuanian Hound is a universal dog, but its passion and work method indicate that this is primarily a hunting dog. The work method during a hunt of Lithuanian Hounds, compared to other breeds, is rather simple, but also special. They may chase an animal by using their voice and alternate it depending on a situation (a fresh track or the animal itself, large or small animal, etc.); slow down the animal being hunted by using their voice and without any contact, or control a boar by contacting it and restricting its movements so that the hunter could approach and hunt it down; find an animal in the hunting area, raise it from its den and chase to the line of hunters waiting for the animal being chased; search of injured animals. (p. 121).

Since our hounds are very clever, they are easy to train and they follow commands well, but this takes time and patience. Patience is especially needed since Lithuanian Hounds are energetic and cannot keep still, they can be trained only by exhausting them physically before training, since only then they are able to keep still and focus on training and commands. Our hounds quickly learn how to follow commands and follow them well, in some cases they are as good as service dogs, but, due to their curious nature, they may become bored of repeating the same command multiple times. It should be noted that Lithuanian Hounds are sensitive dogs and the voice tone should never be raised when reinforcing or disciplining them. If you get angry and start shouting, the dog will get frustrated, abandon its work and will not resume it because its only wish will be to stay with you, please you, reduce your anger and give sympathy.

Lithuanian Hounds are powerful and clever dogs, but they are also gentle, very kind, and loyal. A popular belief that hunting dogs should be chained or kept in a cage, and that Lithuanian Hounds should not be kept in an apartment, is not true. Even though Lithuanian Hounds have a very strong hunting instinct, they are not at all aggressive towards humans; they love and respect their owners. They are very loving dogs that are perfect for families as they get along with all members of the family – not only children, but other animals as well, for example, cats. (p. 123).